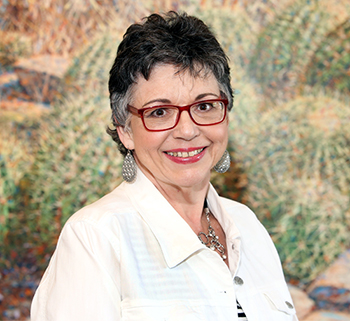 Paula Sturgeon was a young girl when she and her parents drove north from their home in Scottsdale, Arizona to eat at the International Restaurant in Carefree. She remembers the exotic middle eastern food served in what is now the Estrem building of Spirit in the Desert Retreat Center. At the time, she had no way of knowing the restaurant was going to become a major church-sponsored retreat center, and, years later, she would be a strong supporter and board member.

In the late 1990’s Paula, by then, a well-known speaker and retreat leader, was asked to speak to a group of college and seminary presidents who were meeting at Spirit in the Desert. She remembers that it wasn’t until she was a participant in a retreat that she realized the center was a special place offering powerful renewal programs. She said, “I left the event with a closest and dearest friend for life.”

Paula has often been back to Spirit in the Desert, many times using her human resource and hospital management skills to facilitate conflict management and decision-making. She has also been asked to lead retreats and she has been a faculty member of the popular Lutherhostel retreats. Paula has traveled the U.S. leading workshops and speaking about the power of faith in her life. Her story is described in her poignant memoir, Grace Rolls On.

Paula’s inspiring life story begins as child living in Kansas diagnosed with rheumatoid arthritis and her parents choosing to move their family to Arizona because of drier weather and more physicians trained to treat Paula’s crippling disease. Despite severe physical pain and limitations requiring crutches, wheelchairs, the unconditional support of her parents, and over-coming the cruel taunts of grade school classmates, Paula graduated from high school and college, and by her mid-thirties, she was a hospital vice-president.

Along the way, her Christian faith deepened, and she became active in the Lutheran church, planning to change careers and become a pastor. Before she could enter the seminary, she needed another surgery (over her life time there have been more than thirty surgeries) to replace an elbow implant. The surgery didn’t go well and at age thirty-eight she lost her independence and her well-paying job. But, her personal spirit wasn’t diminished; her companionship with the Holy Spirit increased, as did her work serving the church and its members.

In 2009, Paula was asked to serve as one of the directors of Spirit in the Desert Retreat Center. “As a director, I speak my mind and some times provide comic relief when things get tense.” She is delighted to support the center because, “This is a place where the Holy Spirit dances.”