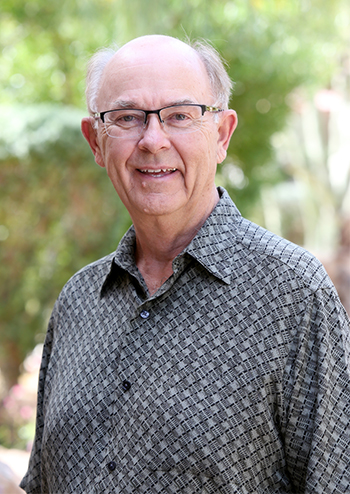 Bob and Myrna Ulland moved to Arizona from Duluth, Minnesota in 2013 and became aware of Spirit in the Desert Retreat Center through their connection with Living Water Lutheran Church in Scottsdale.

Bob brings his financial management expertise to the board. He has degrees in civil engineering and construction management from Stanford and years of experience as president of Ulland Brothers Construction. He said, “My role at Spirit in the Desert, along with others, is to focus on the organization’s financial stability. At times I may frustrate some of my colleagues when I concentrate on the financial reports, but we all agree, “Without a margin, there is no mission.”

Bob added, “I’m very optimistic about the center’s growth and expanded offerings for people who live nearby, for those from around the U.S., and visitors from many countries.”

Myrna, a former healthcare executive, attended a two-day retreat for women from the Grand Canyon Synod in 2015.  She discovered the center was a great place for a retreat, and said, “The staff was attentive to our attendees and the food was great.”

Two years ago Bob and Myrna experienced first-hand one the center’s most popular retreats. They attended a Lutherhostel week and described it as enriching and thought provoking. Bob said, “The main presenter was a college professor, and the theme was God’s creation and the environment. There was excellent conversation among the participants who respected each other’s differences of opinion on an important current issue.” Myrna added, “I agree, and as usual the hospitality was great.”

Asked what motivates Bob to serve on the center’s board, he said, “It’s seeing people being helped, like veterans and first responders, and hearing how much people gain from retreats led by highly-qualified and well-know facilitators that focus on spirituality. Our support for Spirit in the Desert Retreat Center is part of our over-all stewardship.”