What if that person you’ve been trying to avoid is your best shot at grace today?

…And what if that’s the point?

In Accidental Saints, New York Times best-selling au­thor Nadia Bolz-Weber invites readers into a surprising encounter with what she calls “a religious but not-so-spiritual life.” Tattooed, angry and profane, this former standup comic turned pastor stubbornly, sometimes hilariously, resists the God she feels called to serve. But God keeps showing up in the least likely of people—a church-loving agnostic, a drag queen, a felonious Bishop and a gun-toting member of the NRA.

As she lives and worships alongside these “ac­cidental saints,” Nadia is swept into first-hand en­counters with grace—a gift that feels to her less like being wrapped in a warm blanket and more like being hit with a blunt instrument. But by this grace, people are trans­formed in ways they couldn’t have been on their own.In a time when many have rightly become dis­illusioned with Christianity, Accidental Saints dem­onstrates what happens when ordinary people share bread and wine, struggle with scripture together, and tell each other the truth about their real lives. This unforgettable account of their faltering steps toward wholeness will ring true for believer and skeptic alike.Told in Nadia’s trademark confessional style, Accidental Saints is the stunning next work from one of today’s most important religious voices.

“Unflinchingly honest (and funny)…You don’t have to be religious to get something out of this book.” -NPR’s “Best Books of 2015”

“Compulsively readable… [Bolz-Weber’s] love for God and for humankind shines through on every page.” -Publishers Weekly

“[Bolz-Weber] is one of the most important Christian voices around — not because she has come up with some catchy, easy new way to do faith, but because when talks about the destructive power of sin, as well as redemption and grace, she knows of what she speaks.” -Huffington Post

“Wickedly funny and painfully vulnerable, theologically nuanced and lyrically sonorous. [Bolz-Weber’s] voice communicates the scandal of the Christ and the sacraments of his church with more force and vitality than most writers can hope to summon.” -The Christian Century

“Engaging and accessible…Bolz-Weber is clear-eyed about the personal travails faced by the marginalized and those without faith.” –Booklist

“If Saint Augustine were to return to life and live among us now, he would be Bolz-Weber; and if his Confessions were to be written in 21st century rhetoric and style, they would be this book. Accidental Saints is what every Christian yearns to know is possible.” -Phyllis Tickle, author of The Divine Hours and The Great Emergence 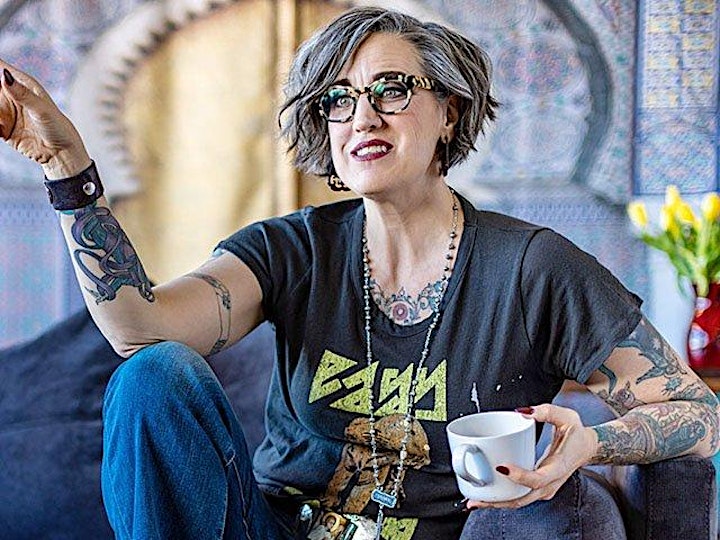 Nadia Bolz-Weber is an ordained Lutheran Pastor, founder of House for All Sinners & Saints in Denver, Colorado, the creator and host of The Confessional and the author of three NYT bestselling memoirs: Pastrix; The Cranky, Beautiful Faith Of A Sinner & Saint (2013), Accidental Saints; Finding God In All The Wrong People (2015) and SHAMELESS: A Sexual Reformation (2019). Nadia has been featured on CNN and in the Washing­ton Post, Bitch Magazine, NPR’s Morning Edition, More Magazine, and the Daily Beast. Her online publication is The Corners.

She writes and speaks about personal failings, recovery, grace, faith, and really whatever the hell else she wants to. She always sits in the corner with the other weirdoes.